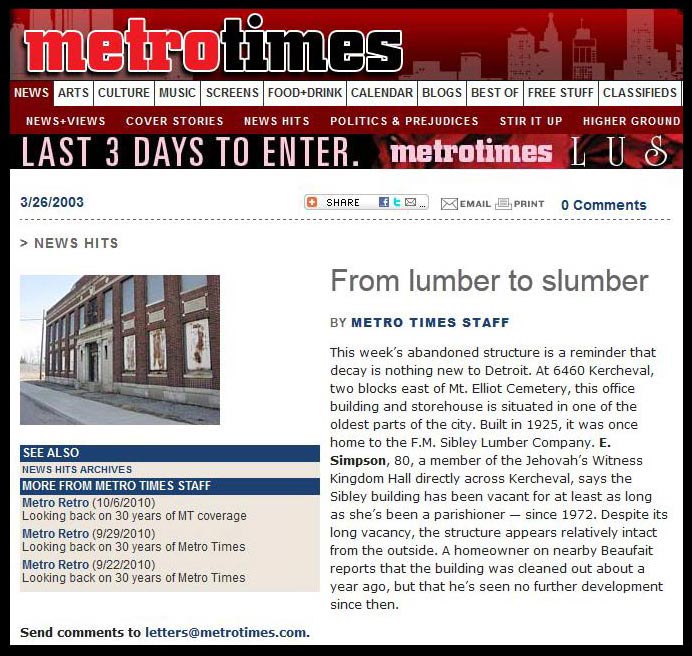 When you buy a historic abandoned building, of course you want to know everything about it. We’re still finding out. No paperwork was left behind; the Burton Library has no entries on the F.M. Sibley Lumber Company and standing in line at the Coleman Young building is a gateway drug to afternoon drinking – so a lot of our information has come from people stopping by our building and randomly obsessive Internet research.

The sellers told us that our Sibley Lumber office building (Wikipedia entry here) had been empty for about 25 years. When the MetroTimes covered it in 2003, it already looked pretty neglected – and a neighbor remembers it being vacant since at least 1972. What happened? Sibley moved out in the mid-1960s and then it had various occupants, including an insurance company and the “Michigan Benevolent Society of Christian Activities” around 1978. But what took place in these rooms since Sibley left is still a mystery.

Frederic M. Sibley was an enterprising lumber baron who had inherited the business from his father in 1912. In 1914 he bought himself a new boat. Looking for a way to transport it to the water, he approached August Fruehauf, a manufacturer of horse-drawn wagons. Moving the boat by horse was too slow for Sibley and he wanted to devise a carriage he could hitch onto his Model T Ford Roadster. Together they figured out a way to convert a wagon into a flatbed trailer. Sibley was worried that hooking this thing to his car would void his warranty and met up with Henry Ford, as one did in those days, to show him his plans. Ford, alas, had his doubts about the contraption (“torque!”) and voided the warranty. Sibley went ahead anyway and so the Fruehauf trailer was born, an invention that ended up being used for lumber and all sorts of other hauls. (It’s partly thanks to this invention that our building was recognized for its historic merit by the National Register of Historic Places). 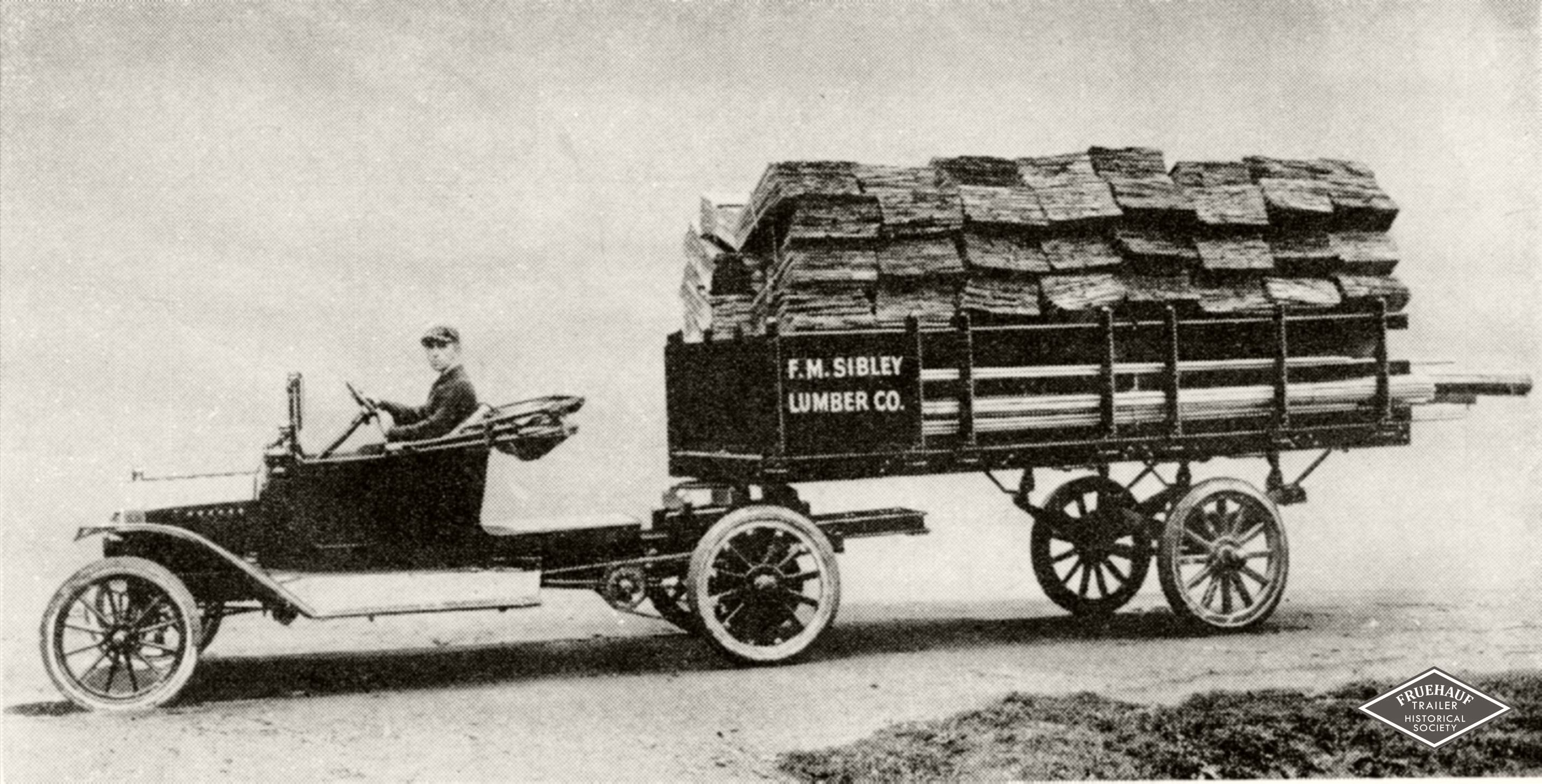 Sibley Lumber had occupied the lots around Kercheval and Beaufait since the 1910s. The company was developing into Detroit’s second largest lumber company with 400 employees at a time of explosive growth in the city. Its original, 20-foot wide office was on the southwest corner (where our building is today), facing its lumberyards across the street. They probably chose the site because it was right next to the now defunct Belt Railway Line which was ideal for moving the wood to factories on the waterfront. Here it is on a map from 1889, showing the depot on Jefferson. 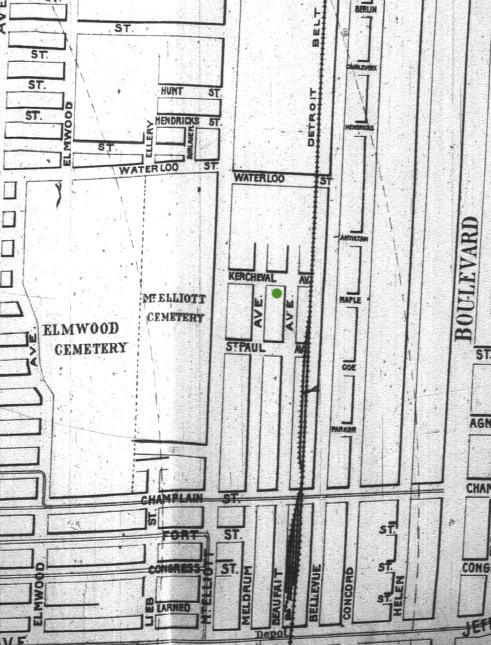 In 1917, Frederic Sibley was kept busy by World War I – he was in charge of airplane propeller production, procuring mahogany and other wood needed for propellers by the US army. Before his actual service in the war from December 1917 to 1919, he commissioned a new office building along Beaufait, followed by a factory and mill building across the street in 1919.

This office building from 1917 is our back building, which has a visibly older style than the front. Sibley didn’t scrimp. The architects Baxter, O’Dell & Halpin were pretty busy around town with apartments, factories and notable structures like the Loyal Order of the Moose Lodge and the T.B. Rayl Co. Building (“Eastern Wig & Hair”). Augustus O’Dell also had a hand in the always fascinating Northville State Hospital for the Mentally Ill and Wayne County Asylum (Eloise). Clearly O’Dell at least was a pretty fancy guy. 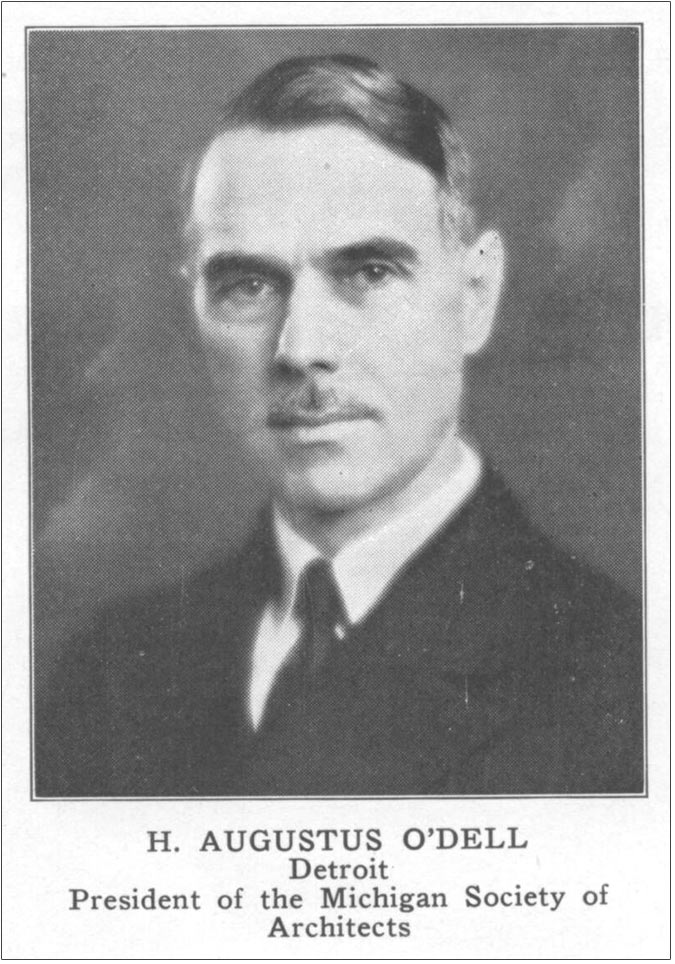 The construction of a new factory and mill across the street from the office might have been the consequence of a catastrophic fire. Sibley had several lumberyards around town, one of which was on Jefferson across from the Wadsworth Manufacturing Company. The Wadsworth building caught fire on August 1, 1919, leaving behind the shell of its factory (below) and lots of destruction at Sibley’s yard. 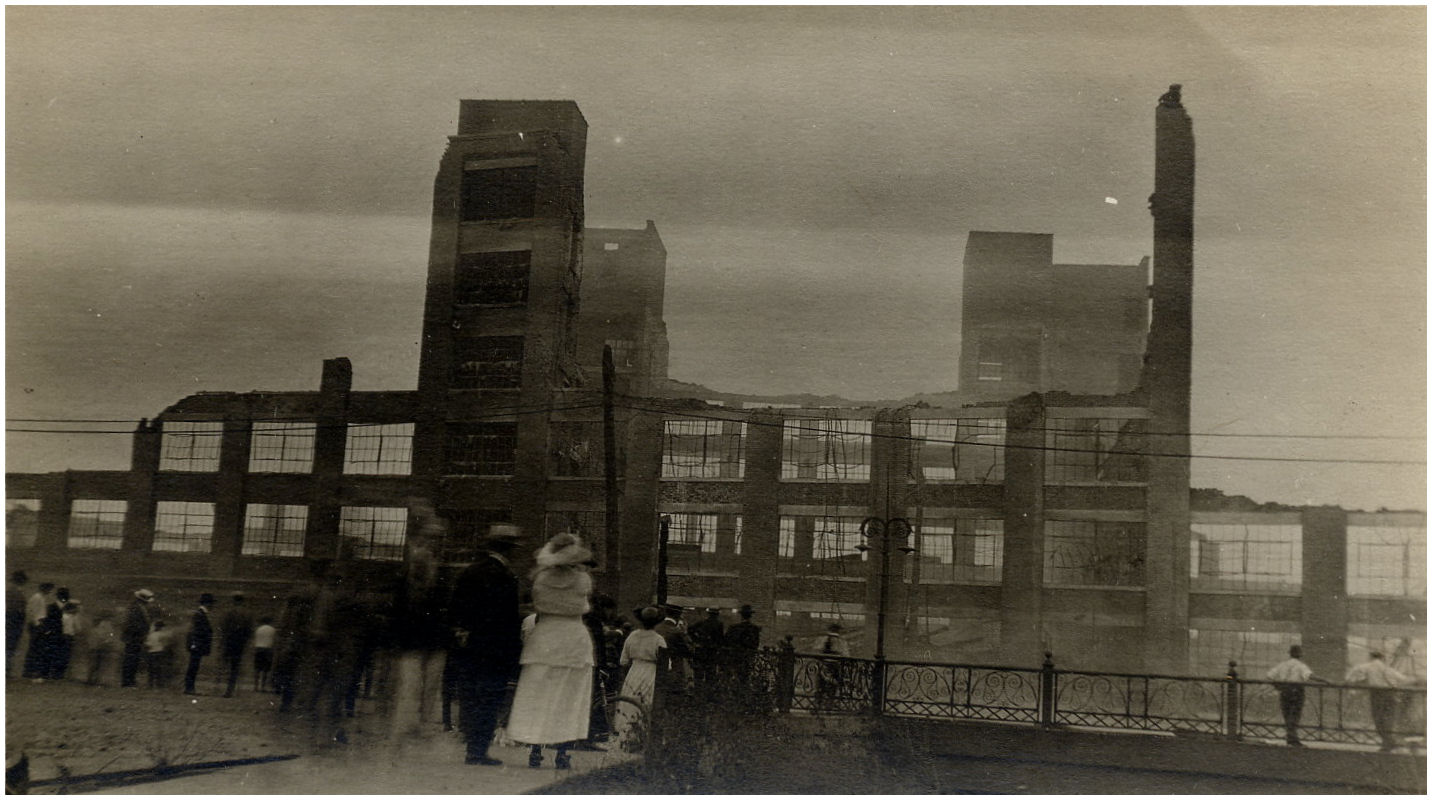 Whatever the reason, our quiet corner of Beaufait and Kercheval was rather a hub of activity back then. Below, a little snippet from 1922: 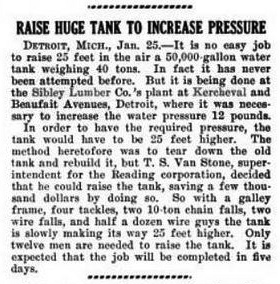 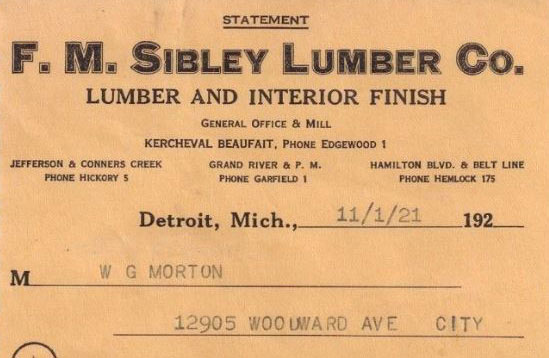 Clearly all this excitement called for bigger offices. In 1925 Baxter, O’Dell & Halpin sprang back into action with a swanky new building of brick and limestone at 6460 Kercheval. It was designed in a Classical Revival style with Corinthian columns, Pewabic tiles in the foyer, and the company name in limestone above the door. The front building was attached to the older office in the back by a corridor and the basements were connected. Voila.

The new offices were used for more than the lumber business: Allen Crow, vice-president of Sibley Lumber, founded the Detroit Economic Club in 1934. For years it operated out of our building. Here is an example of Crow’s wheelings and dealings from 1939. 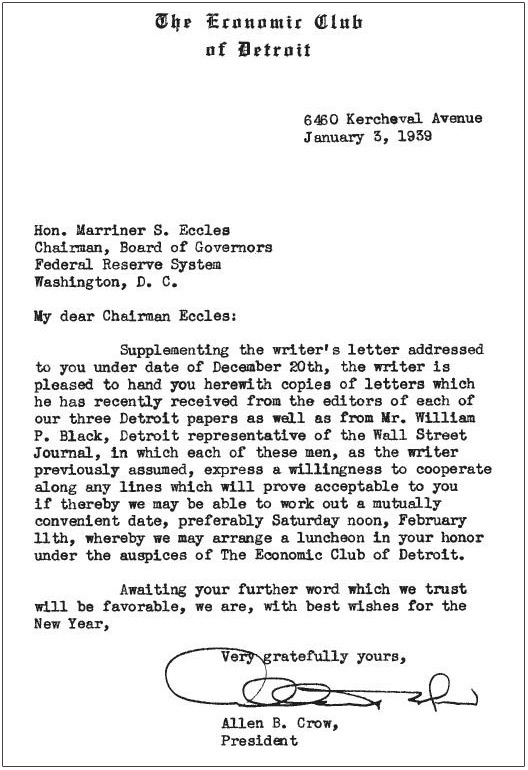 We don’t know for sure, of course, but assume that the best-preserved room in our front building – and the only fully wood-panelled one – was Crow’s office. It has a few little plaques on the wall and undoubtedly that’s where Crow penciled “I’m President!” every morning before his secretary came in and cleaned it up again. We’re calling this room the Admiral’s Quarters and continue to admire its beautiful walls.

The second major fire to hit the Sibley Lumber company was even worse. It happened in 1952 in the factory across Kercheval where a lot of finished wood was stored. It killed the firefighter Stanley Thornton, who was crushed by a collapsing wall. (Free Press article here.) The mill must then have been demolished, making room for the modern-ish building that is now occupied by the Judah Temple next to Gleaners. The F.M. Sibley Lumber Company was dissolved in 1963 (although Sibley Lumber Centers were still in operation then), and that was probably when our building was first vacated. Mystery ensued. 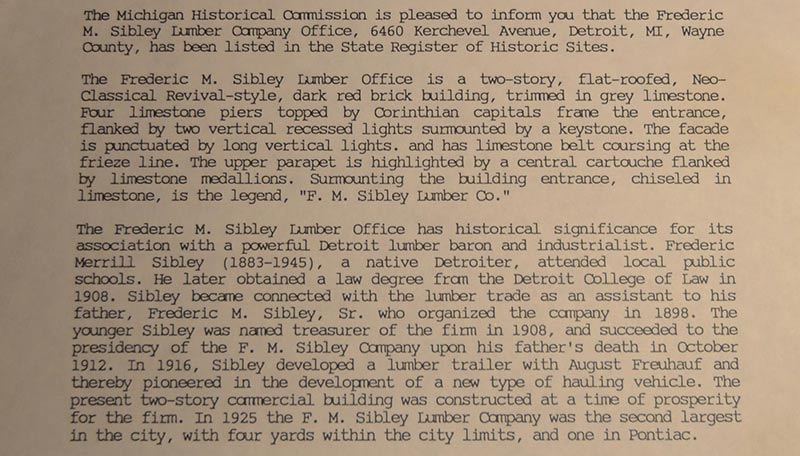 Muccioli’s plans were to turn the space into an art studio and gallery, but unfortunately she died before this could materialize. It was her family who sold the building to us. When we told them of our initial ideas – to turn this into art studios and a gallery – they seemed a little less sad to see the property go.

Thank you to the Mucciolis and everyone else who kept the character of this building intact. If you have any tidbits about what else transpired here, we’d love to hear from you!